For Canines of Mixed Ethnic Heritage 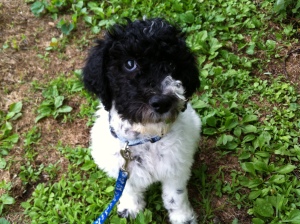 “He’s a golden doodle?” said the woman with the boxer, eyeing my sweet, black-and-white puppy with the same skepticism my mother had faced when I was little. Back then, everyone wondered how I—this brown, curly-haired baby—could belong to my white, straight-haired mother.

“He doesn’t look very golden to me,” said the boxer lady.

“Well he is,” I could almost hear my mom responding. Short, sweet and a little indignant. Just like she handled people who questioned my parentage.

I, on the other hand, lunged into an explanation. “He’s a quarter golden retriever and three quarters mini poodle. His parents were bred from black and white parti poodles. So …” Did the boxer lady need such detail? Did she deserve the lowdown on my puppy’s ancestry?

Of course not. But her question caught me off guard, triggering something in me. An age old response to having my own ancestry questioned.

When Rico came home I thought I was prepared for everything. I’d been researching puppy care for over a year, grilling every dog owner I knew—and some I didn’t know—for tips. I’d learned about crate-training, treat-training, leashes and harnesses, apple spray, and chew toys. I’d researched vets and arranged my schedule to accommodate a “new baby,” which is how everyone said a new puppy would feel.

We’d been trying for a rescue dog for some time also, getting turned down again and again because I’d never owned a dog before, I did not have a vet in place, and because my last pets (the gerbils) had perished in a house fire. And—the ultimate deal-killer for pet rescue organizations—we had children under fifteen. Finally we bit the bullet and started researching goldendoodle breeders. When we found a reputedly great one, I looked on the website for “waiting puppies” rather than signing up for an upcoming litter. You could click on the link and watch a YouTube video of each golden retriever-poodle mix pup interacting with the breeder’s young grandson. I fell for Rico immediately.

A mini-goldendoodle expected to top out at about thirty-five pounds (he’s thirty-three), Rico was sweet and playful with a curly coat—predicted not to shed much, which was a good thing for my husband’s and daughter’s allergies. Though plenty of pups on the website were golden goldendoodles, ranging in hue from off-white to rich amber, Rico and his litter mates were black and white, like Snoopy and Harry the Dirty Dog and the Pokey Little Puppy. Like us too.  Both his parents were half “parti” poodle, meaning black and white spotted.

Rico is a party dog it turns out. He’s a total charmer, loves people, loves other dogs, is even gentle with our neighbors’ toddler twins. He doesn’t chew shoes or furniture. He slept through the night and potty-trained with relative ease. His only vice—kind of a big one—is that he loves to eat debris. Sticks, rocks, socks, ace bandages—a habit that’s sent him to the pet ER more than once. And yes, everyone at the ER loves him too.

None of us can imagine family life without him. He fits us perfectly. As my son says, “he’s even a quarter black and three quarters white like me.” True. But that’s just what I wasn’t prepared for: having the same conversations about Rico’s heritage as I have about my children’s and my own.

For example, this is what people say about my son:

“Wow! You really can’t see the black in him.”

“Wow! You can’t see the golden retriever in him at all!”

“That hair is beautiful. It must be a lot of work.”

“That coat is beautiful. It must get so matted though.”

And the kicker (seriously this happened): “We were thinking our goldendoodle’s coat might get curly too. But Misty has that nice, smooth golden retriever fur. You can barely see the poodle in her.”

Now substitute the words “biracial child” for “goldendoodle” and “black” for “poodle” and you have something like what my mother used to hear when I was a kid.

And I explain. In varying degrees of detail. You might ask, WHY must I answer to these curious passers-by and dog owners? Why do I need to answer prying questions about my dog’s, my own or my children’s ancestry? Why can’t I be more like my mother and give a simple—if snarky—response?

In Maria Root’s “Bill of Rights for People of Mixed Heritage,” it says specifically, “I have the right to self-identify. To identify myself differently than strangers expect me to identify.”

In other words, I have the right not to explain my heritage. As someone who does not look mixed, I am called upon to do this less frequently than my racially ambiguous-looking mixed friends. Since I look black, I don’t get asked “what are you?” very often. People assume I’m black and leave it at that. It’s only when I mention a different piece of my background—that I’m Ashkenazi Jewish on my mother’s side, for example, that people ask How is that possible?

Similarly, people assume Rico is a poodle or a Portuguese water dog. No one means anything by it; no one is judging him. But the word Golden hits strangers the same way Jewish hits them with me. Rico couldn’t care less. The words he knows are sit, stay, leave-it, drop-it, walk, bone, and Ruby (the little dog next door). But I care.  His heritage is what it is—not to be questioned any more than mine or my children’s.

This is why I explain. I explain to be understood. To acknowledge all my heritage, my children’s and my dog’s, not to deny any part, but to embrace all, even the parts that are unseen.

8 responses to “For Canines of Mixed Ethnic Heritage”